Baskerville is a really neat example of mixing patterns.
She is a brindle double dapple.

A double dapple, however, has random markings, which are also usually rough edged. There are no rules about where white is, there can be little or lots, it can affect any part of the dog randomly. Also, a double dapple will often have some sort of eye deformities, even if the dog can see well. This, however, seems to be in contention. Some people believe that dapple piebalds can have eye deformities like double dapples; however, I have never seen a tested dapple piebald with eye issues. We have some new information about different merle alleles coming to light, that may totally explain this. But for now, until I see tested proof, we will continue to say that only double dapples have the eye deformities.

Hearing impairments can happen in any dog with white, so piebalds are also at risk for deafness, so that is not a good indicator of being a double dapple. A double dapple piebald is extremely hard to “diagnose”. And almost always needs to be tested for, to know for sure, though there are sometimes indicators, such as patches of ticking, but not all over.

Dapper, a chocolate and tan dapple 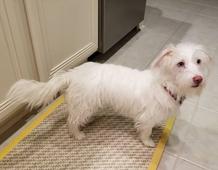 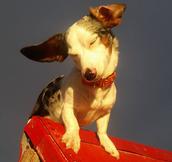 Then we confuse things further, by adding in the piebald gene. The Dachshund breed standards do not allow for the mixing of the dapple and piebald patterns (or brindle, actually) you cannot register a dachshund as more than 1 pattern, and the clubs state that any dapple with white must be registered as a double dapple. They also state that piebalds cannot have blue eyes. This has caused the myth that only double dapples can have blue eyes.

Just because the breed standards will not allow mixed patterned dogs to be registered as such, does not mean that they cannot exist. A piebald can also be dapple, or even a double dapple. Piebald and dapple exist separately and can both affect a single dog. Blue eyes in dachshunds indicate the presence of at least one dapple gene, which means that any dapple, dapple piebald or double dapple can have 1 blue eye, 2 blue eyes, or parti coloured eyes.

Typically (but not always), we can tell the difference between double dapples and dapple piebalds. A dapple piebald will have fairly symmetrical markings, when viewed from the front. Meaning what one ear has, the other has, and what one foot has, the other has. They also have smooth edged, round markings. They may also have ticking, which are coloured spots in the white background. Often, ticking is mistaken for dapple. Dapple is splotches of full colour and diluted colour together; ticking is spots of colour in the white markings. 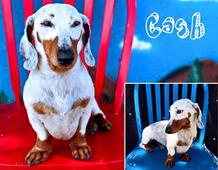 The following dogs are NOT any kind of dapple

Moose (left) and Fauna (right) are nearly pure white, yet their vision is fairly good, however, they are both deaf. 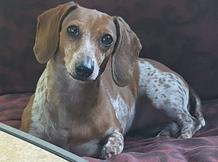 There is also what is called minimal dapple.  A dog may show such a small amount of dapple that no one notices they are dapples.  Here is a perfect example of this:  this dog looks like a black and tan with a white spot on his chest, however, he is actually a minimal dapple, and the dapple can barely be seen alongside the white on his chest.  Unfortunately, he was bred to a dapple, and produced a double dapple puppy before they discovered that he was minimal dapple.  He will not be used on another dapple. 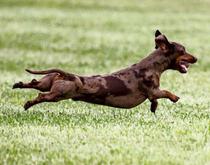 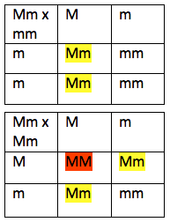 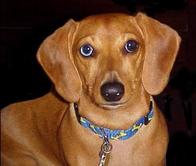 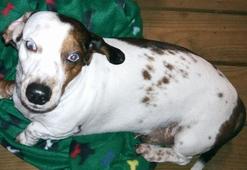 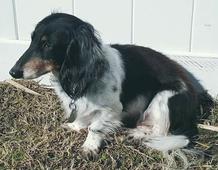 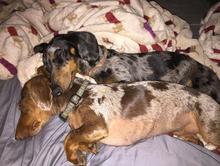 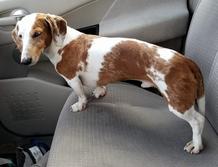 This is another double dapple piebald. You can see ticking in a few places, which tells us that he has to have the piebald gene. 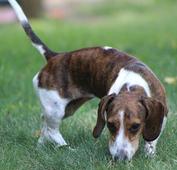 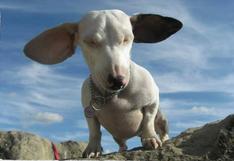 My own dog, Kat, who I am testing for the merle gene,
as I am not 100% sold on her being a double dapple piebald.

Zowie is a red piebald with ticking. She does not have a dapple gene at all.

This is a great picture to show the difference between ticking and dapple.  Percy (bottom) is a chocolate and tan piebald with heavy ticking.

Miss Puppyness (top) is a double dapple. See how Nessie’s white is pure, and her splotches are all in the coloured area. That’s dapple. Percy, however, has spots in his white and smooth, even colour in the coloured areas. Percy has no dapple gene at all.

These are interesting dogs.
They look piebald, but are double dapples. We suspect they are both, due to a bit of ticking in some places, and not in others, plus, their markings are not round and smooth edged. 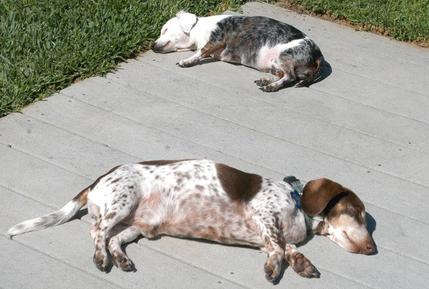 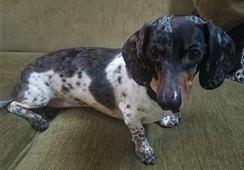 You cannot get a DD puppy from one dapple parent. Both parents must have at least one dapple gene to pass on to the offspring. Double dapple does not refer to the number of colours on the dog, it refers to the number of dapple genes the dog has. These 2 Punnett Squares show probable outcomes with a dapple to solid breeding (top) and a dapple to dapple breeding (bottom). So, as you can see, there is a 50% probability in both breedings of a puppy being a single dapple. The difference is that the bottom breeding has a 25% probability of a puppy getting 2 dapple genes, and being a double dapple. Not every pup in a dapple to dapple litter will be double dapple. In fact, there is a 25% chance there will be solid pups without any dapple at all.

is my dog a double dapple?

Frank is a minimal dapple. You can see the dapple area on his chest, just under his tan point. 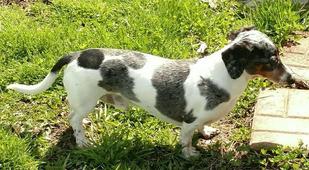 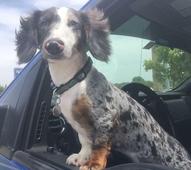 Jake is a black and tan piebald with ticking. 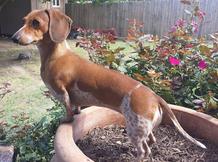 Bailey is a dapple piebald, with ticking.

Cammie is a brindle piebald... another example of mixing patterns.

Lux is another example of very little white but eyes affected. 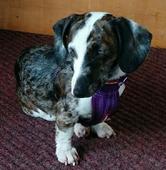 This is something we get asked all the time: “is my dog a double dapple”. The answer can be simple or more difficult, depending on the dog. Some are very clear, some not so much, but we’ll give you the basics here. Knowing how to spot dapple and double dapple, may help prevent double dapples from being born, but may also help puppy buyers from giving money to terrible breeders who do this on purpose.

Dapple is a different name for merle. It is the exact same gene, and when speaking in genetics terms, we call it merle. We use the capital [M] to signify the Merle allele.  Dapple is dominant, which means only one dapple gene is needed for the dog to be dapple. Dapple is the random “splotchy” pattern of full colour and diluted colour. It is not spots on a white background, that is something totally different called ticking, that we’ll talk about later in the piebald section. A single dapple gene is perfectly safe, and beautiful. But trouble happens when a dog inherits 2 dapple genes, which causes varying amounts of white, along with hearing and vision impairments in many DD do 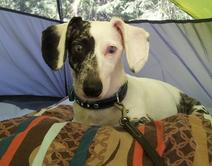 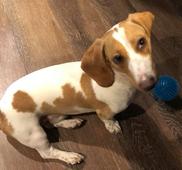 This gets really difficult when one or both parents are cream/red. Cream/red hides dapple. That is because the dapple gene can only work on one of the types of pigment that dogs have, Eumelanin, which is black/blue/chocolate/Isabella coloured pigment. The cream/tan/red pigment, or Phaeomelanin, cannot express the dapple phenotype in its heterozygous (one of each allele) form. Sometimes, you have no idea a cream/red is actually a dapple. There can be clues, for example: If a red has any blue in the eye, it is a dapple. Some look dapple as pups but then it fades as they grow, but the rule should always be, “never breed a cream or a red to a dapple unless it is DNA tested for the merle gene”.  Many of our DD’s come from reds that are “hidden dapple”. Red double dapples will show white, even if they show no other signs of dapple, as dapple can affect the coat in its homozygous (two of the same allele) form. These 3 pictures show a hidden red dapple with a blue eye, a hidden red dapple with very faint dapple on his ears, and a red double dapple.

Bailey is a cream double dapple. She’s a great example of how little white is needed to cause eye abnormalities. She is also deaf. 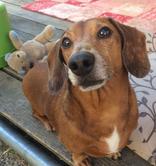 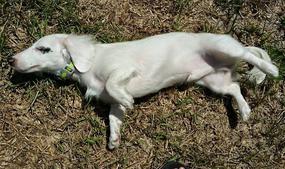 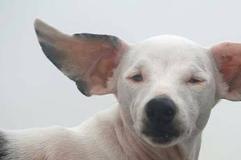 Cash has Vitiligo, an autoimmune disorder that attacks pigment, Eumelanin first, which is why his Phaeomelanin hasn’t turned white yet. 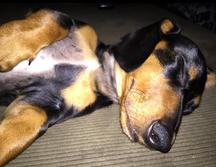 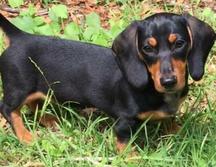 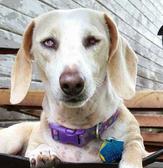 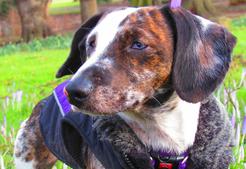 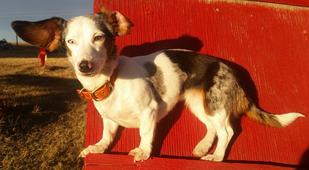